Naoshima is a small island located on the Seto Inland Sea. It has long occupied a key strategic point in the Seto Inland Sea. In modern times, its main industries are fishing and copper smelting. Despite being part of the National Park, the island does not enjoy the same wealth of nature found in other parts of the region, due to the pollution caused by the smelters; however, it is increasingly opening up to international tourism as an “art island.” The art works on display in Naoshima were produced as part of the art project “Benesse Art Site Naoshima,” sponsored by Benesse Holdings and the Fukutake Foundation.
Museums designed to fit into the natural context, galleries, and outdoor art works scattered all over the island are combined to make the island itself into a huge art space. Green areas that had once been lost have been revived. The climate is mild and there is a wonderful view of the sea, dotted with small islands, from the hills and the sandy beach. The time seems to pass so slowly in this extraordinary space, an unparalleled environment combining nature and contemporary art.

The three museums on the island were designed by internationally renowned architect Tadao Ando. The Benesse House Museum is also a hotel, with a concept of “coexistence of nature, architecture and art.” Site-specific works, in addition to paintings, sculptures, photographs, and installations are on display.
Most of the structure of the Chichu Art Museum, created as “a place to think about nature and humanity,” is nestled deep underground so that it does not ruin the view of the Seto Inland Sea. This whole museum is generously proportioned to contain only a limited number of works, by Claude Monet, James Turrell, and Walter de Maria. The Lee Ufan Museum holds works by the internationally active Korean artist Lee Ufan. The museum is divided into three rooms: one dedicated to past and recent works including paintings and sculptures; the “silence room”; and the “meditation room.” The peaceful space gives a strong impression of links to the principles of Zen. On the eastern side of the island is a very old quarter, which flourished in the past for 300 years. The Art-House Project aims to revive the abandoned houses in this area, which has a unique aura, by combining them with contemporary art. It was started in 1998, with “Kadoya,” which was followed by “Minamidera” (a former temple), the “Go’o Shrine,”“Ishibashi,”“Gokaisho” (gathering place where people came to play games of go), “Haisha” (former dental clinic), and “Kinza.” Currently, six houses are open to the public.
Some leading contemporary artists, including Japanese-style painters, sculptors, photographers, and architects, stayed in the region and worked on the houses, tracing back the memories of the people of the village and the history of the houses. Thus, the project has involved the residents of the village, too. The resulting works represent the synchronization of “island time flow” and the sensitivities of the artists. Traditional artisan techniques were utilized for the restoration work, and these works also revive the brilliance of traditional houses of the Setouchi Islands, with burnt cedar boards, tiled roofs, and the beautifully done mud walls.
[Opening Hours] 10:00 a.m. - 4:30 p.m.
* The Go’o Shrine is accessible at all times.
* Kinza is closed due to restoration work.
[Closed] Mondays
* Open on Mondays for national holidays but closed the next day.
[Admission]
Multi-Site Ticket for six art houses, excluding Kinza 1,030 yen Single-Site Ticket for one art house, excluding Kinza 410 yen A huge red pumpkin figure becomes visible as the boat approaches Miyanoura Port. This is a creation of Yayoi Kusama, which, along with a further, yellow pumpkin, seeks to turn ordinary scenery into unusual space. All around Naoshima, art objects are placed everywhere – at the beach, on the cliff, on the grass. A cylinder by Dan Graham, seascapes by Hiroshi Sugimoto, huge spheres by Walter de Maria, a ship by Shinro Otake, and other works installed individually show different expressions of the season and the weather – light changes on a hot summer day, for example, rainy evenings, the beach in the midst of a morning mist or in bright sunset, and so on. The scenery of Naoshima is constructed so that nature and art complement each other.

he title of this art work, “Naoshima Bath” ("I♥湯”), is pronounced “I love you.” The kanji 湯 is pronounced “yu", which means “hot water.” Produced by Shinro Otake, this is an art work in which one can actually bathe. Otake used the technique of scrapbooking, filling the “sento” (bathing house) with unusual objects, such as a ship’s bottom, a cockpit, an elephant, film posters, postcard collages on the walls, a greenhouse with cacti, etc., creating the so-called “Otake’s world.” He also tried a new technique using painted tiles to create mosaic pictures on the walls and the ceramic parts of the toilets.
This all merges into an impressive space, where attention has been paid to every detail. Bathing in this extraordinary sento with people from all around the world is an exciting and unique experience. The Naoshima Bath is conveniently located just one street behind Miyanoura Port, and original towels and body soap are available to buy on site. Why not give it a try while waiting for the next ferry? [TRANSPORTATION ON THE ISLAND]
Bus – The town buses and Benesse Art Site Naoshima shuttle buses are available to visit the art works on the island.
Rental Bikes – Available at Miyanoura Port and Honnura Port. Electric bikes are recommended due to slopes.
22 records 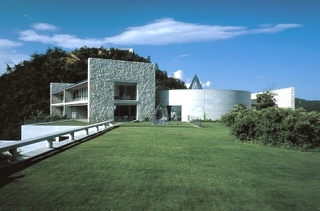 On the scenic south coast of Naoshima are three art museums designed by Tadao Ando, the internati...