THE STORY OF TESHIMA: GET BACK TRUE "RICHN... The village of Nakayama is situated in a mountainous area, located roughly at the center of Shodoshima. In the midst of the village of Nakayama is Senmaida, the famous layered rice terraces, spread along the surface of Mt. Yubune. Surrounding the rice paddies are yawning mountains, Tonogawa River and a landscape dotted by local homes. The area is known for its beautiful scenery, where tourists can enjoy the changing seasons in a long-established Japanese landscape, especially so between rice planting and harvest time.
The history of Nakayama Senmaida goes back to the mid-14th century and stretches to the 18thcentury. Formed by the local forefathers in a step-by-step fashion, the rice terraces were created by bonding stones together on steep hills. Protected for generations, the historic layered paddies today suffer from an aging farming population and a lack of successors. The traditional Kabuki, held in the area in honor of praying for a good harvest, has taken place for 300 years.

Nakayama Senmaida, the rice terraces of Nakayama, is made up of 800 rice paddies that vary in size from small to large, and which forms an elegant curve on the mountainside. The area's fascinating scenery has been selected as one of the 100 best rice terraces in Japan. Fresh water from Mt. Yubune, which has also been selected as one of the 100 best water sources in Japan, feeds the sweet rice grown here. Try some local dishes at Komame Shokudo, the former rice mill situated at the middle of the rice terraces. Here you can enjoy elaborately nurtured sweet rice, traditional thin wheat noodles and the branded Olive Beef burgers, among others. You're sure to enjoy these simple but delicious dishes, cooked with fresh “Yubune water”. stablished 300 years ago, Nakayama Noson Kabuki is a traditional Kabuki performance dedicated to the gods as a prayer for the harvest. Prepared and performed by local residents, the stage setting and performance have both been designated national tangible folk cultural assets. Every year in May, on the day of the play, it is tradition for the audience to enjoy the show along with drinks being served. Mushiokuri pest control is another traditional event in Nakayama that has been conducted for nearly 300 years. On the 11th day of the summer solstice, the villagers walk the footpaths of the rice paddies with flaming torches, expelling bugs while at the same time praying for the productiveness of the grain. The event was once again established in 2012, after several years of absence, attracting visitors with its fantastic display of glimmering torches. 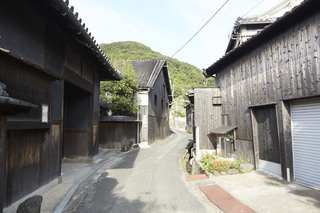