SHODOSHIMA: “HISHIO-NO-SATO” TRADITIONAL SOY-SAUCE-MAKING HANDED DOWN FROM GENERATION TO GENERATION 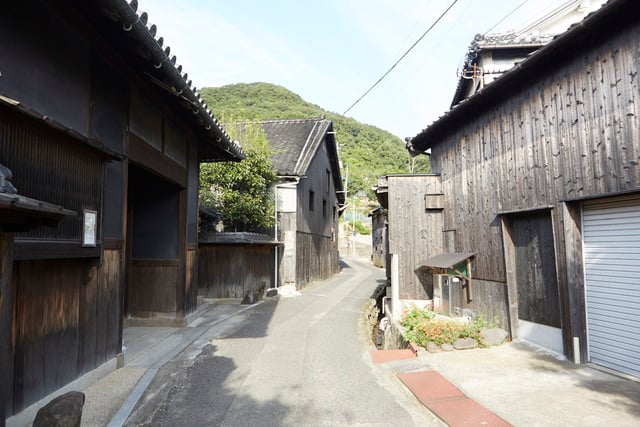 Soy sauce (“shoyu” in Japanese) is said to have been made on Shodoshima for more than 400 years. Salt-making on the island dates back even further, to the Yayoi era (approximately the third century B.C. to the third century A.D.), and the salt made here, known as “shima-shio” (literally “island salt”), is renowned for its quality. With the development of sea transport, ingredients such as soy beans and wheat began to be brought in; the moderate climate, suitable for yeast activity, combined with the patient nature of the islanders, promoted fermentation activities such as soy-sauce-making, which became one of the island’s major industries.
There were 400 soy-sauce-makers on the island 200 years ago, making it one of Japan’s major soy-sauce-producing regions. After the Second World War, severe food shortages imperiled the nation; in this context, “tsukudani” became another important product of the island. This is a sort of preserved food made by simmering seafood, meat, seaweed, or vegetables in soy sauce and other seasonings. Good soy sauce is an important ingredient. As a preserved product, tsukudani is easy to transport. The island is now Japan’s largest producer of “kombu” (kelp) tsukudani.
Today, there only 20 soy-sauce or tsukudani manufacturers on the island, after years of prosperity nurtured by nature and society. They still make the soy sauce and tsukudani in the traditional ways. Visiting the Hishio-no-sato, you will be welcomed by houses and soy-sauce stores and production houses with black, wooden walls, with the savory aroma of soy sauce filling the air. The Sho-no-sato is good for a casual stroll, as the area not only has the soy-sauce and tsukudani-makers and their shops, but also various other shops and attractions, including a soy-sauce factory you can visit, a “sake” shop with café space, and a “somen” noodle shop where you can try somen-noodle-making.

Yamaroku Shoyu is one of the island’s soy-sauce makers. They accept visitors into their working space, where they prepare and store their “moromi”– unrefined soy sauce. It is a good place to learn how soy sauce is made in the traditional ways, which take time and involve nature’s
assistance. They have a tea-house space in front of the main building, where visitors can have a rest and enjoy roasted rice cakes with soy sauce and original soy-sauce-flavored desserts. The Umaki Walking Promenade is a walking course lined with houses and buildings with tiled roofs, black wooden walls, and white mortar walls. These include a group of buildings owned by Yamasan Shoyu, a registered tangible cultural property, and a moromi warehouse. It takes about 20 minutes to walk through the course, in a pastoral atmosphere permeated by the soy-sauce aroma, along foot paths between rice paddles, wild flowers, and olive groves. The only sake brewery on Shodoshima brews sake using spring water from Mt. Hosigajo, near the top of Kanka-kei Gorge at the peak (817 m) of the island. The gorge is known as one of the three best in Japan. The brewery is one of the few to be located on Japan’s small islands. It also has an art gallery with a café and bar. What used to be a tsukudani factory, built around 70 years ago, now serves good sake as well as food made from produce of Shodoshima and sake and/or sake lees. At Nakabuan, there is a somen noodle factory that offers a glimpse of 400 years of culinary culture on the island. You can experience somen-noodle-making in 60 minutes (advance booking required) and enjoy somen noodle meals at the restaurant while watching the noodles being manufactured.