A number of artworks are situated along the prefectural road that runs around in Teshima for 12km and Karato, Ieura, Suzuri and Kou areas. Karato has the most artworks among these (see the separate article); however, other areas are receiving more new works. Although the island is small, it is advisable that you plan your visit, since the artworks are generally situated away from the main road and as such, it may take time to reach them. Extra artworks are added during the Setouchi Triennale. Some of the artworks are permanently on display, but others are open to the public only during the weekends, so make sure to look up this information before visiting.

Teshima Yokoo House can be found among local buildings that include the port, a school, the post office and the shops of the Ieura area, on the western side of the island. Based on the traditional folk houses of the island, the building consists of a kura (storehouse), omoya (the main building) and naya (the barn), which are surrounded by stone moats that are unique to this area.

The old house was renovated and partly expanded by architect Yuko Nagayama. Red window panes have been installed in the burnt cedar panels that complement the other houses surrounding it. The “strangeness” of the house can be felt even from outside. When viewing the artworks through the red glass window the change form as you move and the reflected space appear to be collaged.
Teshima Yokoo House has 11 artworks on display by Yokoo Tadanori; there are also installations in the house's stone garden – a pond and a cylindrical tower – rendering the entire house a philosophical work that symbolizes Tadao’s views of life and death. Shinro Otake's new work for the Setouchi Triennale 2016 was made from a huge wooden hull-form, from which he created a ship made of Fiber Reinforced Plastics without cutting it once. This wooden hull-form, measuring more than 17m in length, had been in a shipyard in Uwajima in Ehime prefecture for the past 30 years, never serving its original purpose, that is, to build a ship. This work brings together the wooden hull-form with a disused latch needle factory that stopped operation 30 years ago to give them a new life as his 4th artwork on the Seto Inalnd Sea. Tom Na H-iu is an ancient Celtic site of spiritual transmigration, where souls were believed to spend a long time before entering into the next migration. Tom Na H-iu was inspired by this legend, as well by historical fact supporting the notion that ancient peoples had built upright stones in many places. The three-meter tall object made of glass is connected to the Kamioka Observatory (Super-Kamiokande) in Hida, Japan, and receives data pertaining to neutrinos generated by supernova explosions (the death of a star), making it glow interactively. Thus, it represents the birth and the death in the universe. 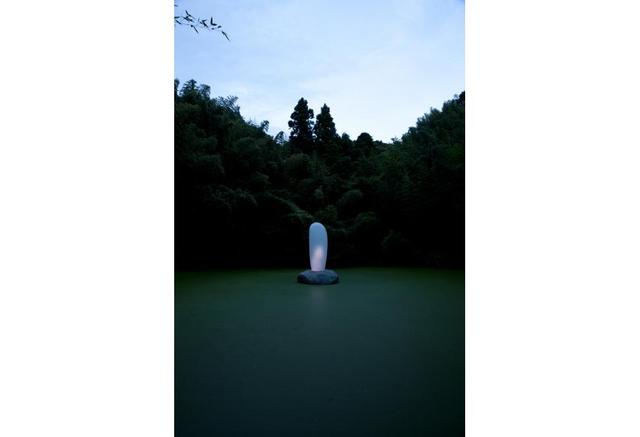 Teshima 8 Million Lab, or Yaorozu Lab, was conceived as a space for exhibitions that present fictional worlds that can be realized by science and technology, thereby posing questions about ourselves in future worlds. The building was designed by Yuri Naruse and Inokuma, and was built in the seaside area of Kou, in southwestern Teshima. The first exhibition here in 2016 is "Red Silk of Fate – Tamaki's Crush", an installation by artist, designer and Associate Professor at the Massachusetts Institute of Technology’s Media Lab, Sputniko! The artist, who is known for creating works that reflect issues prevalent in modern society, explores with this work possibility of “creating a new myth”, as cutting edge biotechnology may be able to realize the creatures and phenomena found in ancient mythologies. A tunnel-like work situated in the former meeting place of the village, the artwork comprises roughly 600 windows and doors that were collected from abandoned or disused houses in the village due to depopulation. Visitors will see rice paddies in front of them and the sea behind them. Surrounded by farming fields, the landscape, the house and building material waste obtained from what the villagers used to use. Local people had been involved in creating this artwork, contributing to the artwork's sense of capturing the “distant memories” of the villagers. Although there had been a plan to demolish the piece due to its deterioration, it is still being exhibited as of 2016. 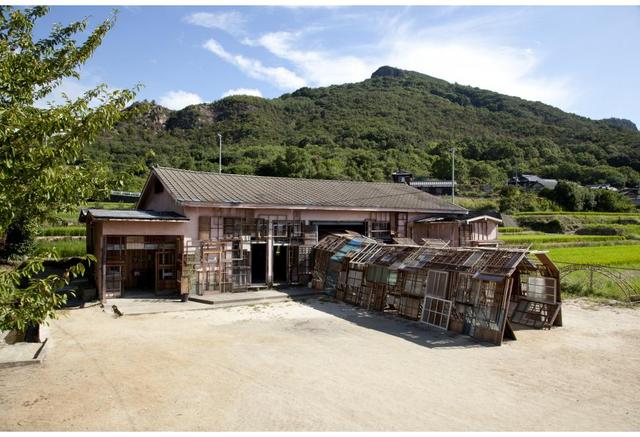 Area: 14.49 square kilometers/perimeter 19.8km
[ACCESS]
Teshima has two ports 1) Ieura Port; 2) Karato Port
From Takamatsu: 25 min by boat to Ieura Port
From Shodoshima (Tonosho Port): 20 minutes by ferry to Karato Port and an additional 30 minutes to Ieura Port (50 minutes by ferry from Tonosho Port to Ieura Port)
From Naoshima (Honmura Port/Miyaura Port): 20-25 minutes by boat to Ieura Port
[TRANSPORTATION ON THE ISLAND]
Rental bikes (automatic) or public bus
Rental bikes – available at several shops at Ieura/Karato harbor.
*The roads on the island have many slopes, so be careful not to bike too fast. Observe the traffic rules when cycling.
Taxi: only one taxi in the island *Requires a reservation.